This is an ad for North Dakota’s tourism. It’s talking about having dinner, drinks and how the evening might just turn for the better. 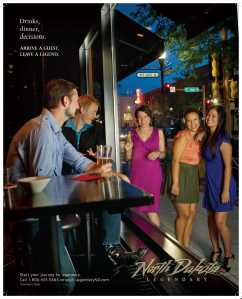 We're guessing the people who think this ad is X-rated don't watch much True Blood.

Yet, the North Dakota Tourism Division had to pull it because it was too racy.

When I heard this, I thought maybe I was looking at a different ad. Not this one. I was wrong. This was the one, indeed.

So please tell me what’s wrong with the ad.

Is it that guys are smiling at women? That can’t be it. If guys can’t flirt with women, we should ban all beer advertising, then. Good luck with that.

Is it that those guys are going to leave town as “legends?” Because if people talked endlessly about their exploits and adventures in North Dakota that would be…bad?     Because men and women don’t hook up and routinely talk about what happened last night to each other?

Come on. Vegas Tourism has been running ads for years about What Happens in Vegas Stays In Vegas, even if that means using a different identity along the way. There’s nothing here to suggest the scenario even goes that far.

Still, this ad was pulled. One person called it “sickening.” I’m guessing that person doesn’t own a television, read magazines or listen to the radio. And/or that he’s Amish.

Now, I’m not even going to speak to whether the ad is good or not. OK, scratch that. This is not the greatest ad. Partially because I’m not sure what it means to be a legend in North Dakota and partially because the cliche image could be anywhere in the world, giving me the impression that there’s nothing good to show in North Dakota. Wow, a place where men and women meet each other in a totally nondescript nightlife setting? Two tickets to North Dakota, please! I’m sure they could’ve found somewhere attractive in the state to shoot the ad. You can make any place look attractive with the right lighting and camera angles.

But let’s put ad critiques aside because there’s an even deeper problem here and it’s been going on forever.

“It really just takes one or two (negative comments) and then people jump on the bandwagon,” said Sara Otte Coleman, director of the ND tourism division.

Exactly, Sara. You get it. You see this lunacy for what it is. So the right move rather than pull the ad would be to recognize that this isn’t really some “will of the people” as much as a Loonie and Lemming Stew – a couple of people who overthink an ad and a lot more people who follow them into far-fetched judgment. All that’s missing is Fox News to capture the “Uproar in North Dakota” for a full overblown masterpiece.

I’m just tired of the overthinking.

I’m tired of the political correctness.

I’m tired of catering to people far outside of the target audience who are given too much credence because they happen to yell the loudest in the room.

And I’m tired of too much media influence from the next “Family Values For A Better Tomorrow Who Force Those Values On Everyone Without Asking” Group.

It’s time to stand up for Common Sense.

Brands tell stories that are intended for a certain group of people. Not everyone. Maybe not even your wife and kids. You may see the ad in the media, but that doesn’t mean it’s for you. It’s trying to please the people who would buy it.

But here’s the real interesting thing – if nothing else, that ad did far more than I ever would’ve expected for it in that it started a conversation across the web about North Dakota. People by and large couldn’t believe the thing got pulled. The tourism people were quoted. Comment boards were burning up.

Bam. Mission accomplished. If I was North Dakota tourism, I’d be sending those protesters of the ad a thank you note. Maybe they were planted and were working for the department of tourism all along (conspiracy?).

Point being that if the people protesting this ad had never done so in the first place, this ad would’ve passed like a ship in the night. It just wouldn’t have registered. Because this ad didn’t stir the pot. The protesting over the ad did. And that’s what every group that protests advertising fails to understand. The more you talk about it, the more offended you become, the more you go on talk shows voicing your anger,  the more attention you give to the very ad you want people to ignore. So if you really want to get people to ignore the ad, don’t talk about the ad on every news network you can find.

And if you’re a marketer, don’t give every voice on the web equal weight. Because it’s not true to say that every voice deserves that. Because you have to distinguish who your best customers are, who your best prospects are and who the people who’d never get within 50 miles of your product are.

I didn’t say completely ignore those naysayers either. Speak to them. Listen to their concerns and address them, whether it’s by phone, email or social media. See if they’re the kind of person who can be reasoned with in an intelligent conversation or they just want to hurl stones at your brand to call attention to themselves like uneducated, ignorant neanderthals.

Converse. Ask questions. Answer questions. Don’t be the brand that invites more drama by running from the questions. Be the brand that offers a helpful solution. You’d be amazed how rational people just want to be heard more than anything, even if it means they aren’t going to get their way.

“Have you ever tried our product?” “Would you like to?” “Why do you feel that way?” “What was the problem because maybe we can suggest a solution?” You’ll know fairly quickly if you’re dealing with a genuine customer who matters, a customer who can be saved or a whiner who never had any intention of buying your wares.

You don’t have to agree with them either – but explain your side in detail too.

Opposing opinions is what makes the world go round. Just remember whose opinion you’re trying to covet most. And whose you have to shake your head at.

When you’re faced with a dissenting opinion from someone over an ad you ran, whether it’s online or offline, how do you handle it? Ignore it? Address it? How do you go about it?