There used to be a time when country clubs and golf clubs could mention who their course was designed by, show some great aerial photos of the course and rely on that to do much of the heavy lifting for drawing interest.

Those days are gone and I don’t think they’re going to return. Clubs of all varieties find themselves trying to plant their stake in the ground when it comes to positioning themselves and standing out. Why? People aren’t walking away from playing the game in the midst of economic turmoil (walking away temporarily due to their scores, perhaps), but these people certainly are being given options to explore. And it’s forcing clubs to get creative. Yet, some of the “creativity” I’ve seen from club managers consists of price-driven daily specials to get golfers in the door that may give a short jolt at best for a slow day but rarely results in any long-term loyalty.

When a golf club or country club can build an effort that’s true to who it is as a brand based on its heritage or profile of members, I think it’s got a genuine story to share that’s worth telling. When it’s not genuine (i.e. a country club that pretends to be kid-friendly toward potential new members despite the fact there aren’t any facilities or programs to cater to children), people find out not long after the membership Open House, if not right then and there.

So it was refreshing to witness a tournament that plays so well into the fabric of what a club is all about. Downers Grove Golf Club  is the oldest golf course in America west of the Allegheny mountains, established in 1892. Sure, this is a nice factoid that’s good for bragging rights vs. your typical course, but rather than resting on its laurels, Downers Grove let its past come to life at the All American Hickory Open this weekend.

If you think this is your ordinary corporate golf tournament, think again.

Put away your tees, sir. You'll be making your tee old-school today from a pile of sand.

The beauty and originality of the Hickory Open is that it is played with pre-1900 golf equipment, including golf clubs and golf balls. As a bonus, I was pleased to see nearly all the players in the tournament getting into the act by dressing the part of a turn-of-the-century golfer too. Knickers and ties for men, ladies with parasols. From a real brand perspective, the result I see here when you have an event like this is that it’s not only a nice piece of revenue for the golf course but hopefully an annual event that gets continued and growing coverage – not as a gimmick but as an authentic tie to the club’s roots. It’s about playing with the instruments of the past on a course that’s as steeped in history as any. Close your eyes and you’d think you’re in 1890. Considering how many of us see the golf course as an escape, think about the number of gents I saw taking pictures of one another as they whacked at a ball not off of a tee, but off a mound made of sand – just like the way they used to do it back then.

They had an experience that was unique, memorable and just as important – tied back to the club. A brand can get a lot of mileage out of a memory like that. 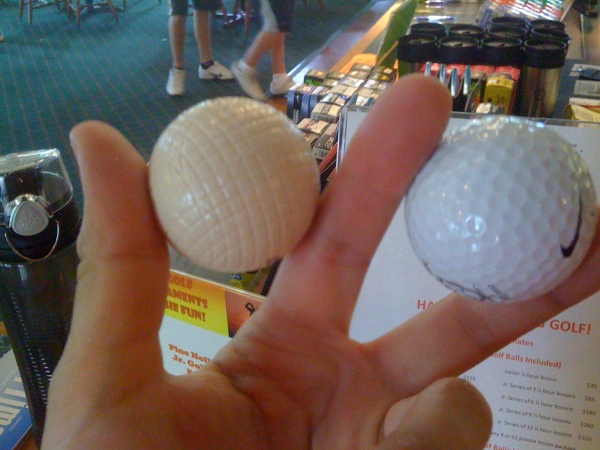 On the left, a ball from the old days. On the right, a modern day ball. Different size, different texture. They hit the one on the left a lot better than you'd expect.

In case you’re wondering, even though there’s definitely a difference from yesterday’s clubs and balls to what we use today, most of the shots I saw with the old sticks were pretty darn good.

If you’re a GM, Membership Director or Board Member of a golf or country club, what are some of the creative ways you’re attracting interest with your authentic brand’s story? If you’re stumped and need a framework on where to begin, here’s a good starting place.