You’re an agency Creative Director and you’re charged with the following agenda from the Milwaukee Health Department: Show how sleeping with your baby in the same bed is dangerous. 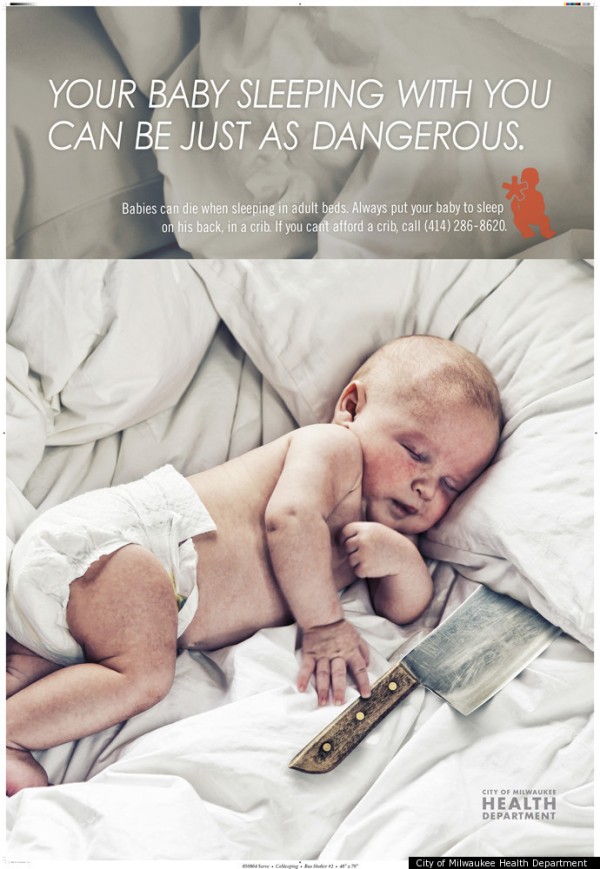 SERVE Marketing came up with this to get the point across. I know. Some of you might be outraged. Go ahead. Call it extreme. Maybe you’re offended by it enough to show it to other people. Or comment on blogs. The Today Show sure did – some medical talking head they bring in regularly named Nancy Snyderman said it was wrong.

Golly. If I didn’t know any better, I’d say a whole lot more people are suddenly talking about the dangers of sleeping with an infant in the same bed.

I say Mission Accomplished. Whether you agree with it or not, it got people in Milwaukee conversing about an important subject. Think about all the stupid irrelevant garbage we’re obsessed about on a daily basis, from the poor plight of Kim Kardashian to anything that passes as “Breaking News” that really isn’t.

The fact is, cause advertising has to do something extreme to get us out of our comfort zone and actually do something on behalf of that organization. Yes, sometimes we have to change the channel when we see those ads of abused animals set to Sarah McLachlan music, but we know exactly what it’s for and we know the importance of the message. Note that when I talk about doing something extreme, I don’t necessarily mean it has to be extremely depressing. There are actually fun ways to convey a message too – for example, an animal shelter filmed a music video recently consisting of one continuous shot throughout the shelter of staff singing with the animals to be adopted (even though the music’s been removed for some reason, you can see it here to get the idea – thanks to D Zorea of DDZ Accounting for supplying it).

So perhaps not everything in its tone has to be doom and gloom to get people’s attention. But doing so doesn’t necessarily mean it’s wrong. Think about it. When you depend on private donations and you’re a financially challenged organization, you have not one, not two but three major hurdles: 1) Getting people to feel anything about you to the point of picking up the phone, attending an event, going to your site/Facebook page, etc., 2) consequently donating time, money or both requires a really big conversation piece and 3) getting #1 and #2 done on a small budget.

What you have is a result big enough to save a few more infants from an awful accident that could be avoided. Big enough to at least get parents to consider where they stand on the issue and talk about it amongst themselves.

If it makes you uncomfortable, that’s not always a bad thing. We have issues in our daily lives that are not comfortable – so are we going to pretend we all live in Disneyland or are we going to discuss them like human beings who have things that give us very real, negative emotions?

I’ve written more than a few ads over the last decade and I’d be lying if I haven’t been asked on several occasions, “Can we make this copy sound a little less negative?”

Sorry. Not this time.

I’m sure you have a thought or two on this approach, so what’s your take? I’d love to hear. Shocking? Provocative? Effective? Offensive?